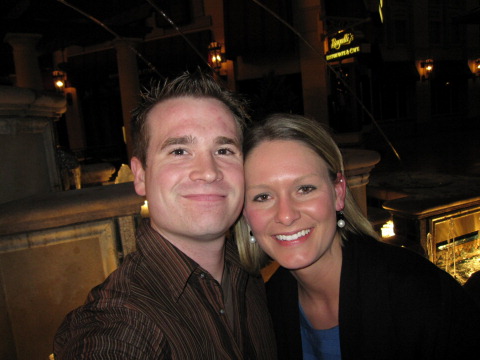 It was an eventful summer five years ago when Chad and I first began hanging out. We spent every free moment together with our mutual friends, while trying to prove to ourselves and all of them that we werenвЂ™t ready for a relationship! God, however, had other plans. One of the main highlights was on the Forth of July weekend, where 20 of us rented a house boat (with a questionable battery and lavatory). The weekend got off to a rough start after I realized we had a communication error on who was to bring food, so we were limited to Easy Cheese and OreoвЂ™s. Consequently, the two of us became involved in an Easy Cheese fight. Chad and I quickly discovered you can learn a lot about a person if you are stuck on a forty-year-old boat with no shower or make-up for three days during a serious heat wave! Needless to say, our boat stunk to high heaven; it must have broken down five times in three days! There were so many bodies on that boat we had to fist fight for a place to sleep. Chad and I soon realized that we both liked to be the center of attention and instantly began a competition on who was the wittiest; a topic that we still battle with! Looking back, however, you could have put us in the Hyatt and we wouldnвЂ™t have had any more fun! It was magical in itвЂ™s own little way. After that weekend, we both knew we felt something special for each other. Our first official date was a Cardinals-Cubs baseball game in St Louis. My birthday was around the corner and Chad asked me if I wanted to go. He then explained that the tickets were bought by his ex-girlfriend, and asked if I minded. I said no, and that I wanted to call her so that I could thank her properly! I love the CARDINALS ( I think he was a little surprised by my reaction)! It ended up being the greatest baseball game either one of us had ever seen. We quickly developed a strong relationship during those first few months, spending every moment we had together. I proved my love that summer with trips to the farm, doing anything and everything Chad and his dad said I wouldnвЂ™t or couldnвЂ™t do. Chad proved his love to me by helping my family and I remodel my first home (after working 60 hours a week). I knew I had Chad hooked when he taught me how to shoot a gun and castrate a bull; all in the same day. From that day forward, he prayed that if the day came, I would choose to shoot him first (before castration)! At some point during the summer of 2005, we discovered that my aunt used to baby-sit for Chad when he was a child! My aunt and cousin instantly fell in love with Chad and his family. They still talk about his вЂњcute little bottomвЂќ (which instantly grosses us both out)! Like any couple we had our ups and downs. Our вЂњdownsвЂќ lasted 14 days without power, during the Ice Strom from HELL! Chad quickly realized that I get a little annoying with my extreme optimism! After all, it was like an in-house camping tripвЂ¦a true adventure!! I quickly realized that Chad loses patience with everyday the cable is out! We grew a lot during that 14 days, and continued to learn more about each other. That seems so long ago now, but from those days on, it has been one great adventure after another. We have shared so many laughs and good times, along with a few tears (mainly from Chad making me laugh/cry, or losing at the casino). A lot of sporting events, concerts, and 10K runs have provided us with memories of a lifetime. Our life consists of constant laughter and sarcasmвЂ¦who knew it could be this much fun! The two of us have grown so close to each other, and have become the otherвЂ™s вЂњbetter halfвЂќ. Chad and I are eagerly awaiting what the future has in store for us!

We will make this marriage official on June 19th , 2010 at 6 oвЂ™clock in the evening at University Heights Baptist Church. This church holds sentimental value to me, where forty years ago my parents were married. The church is located at the southeast corner of National and Grand.

Our celebration will continue at The Tower Club, where adult cocktails, dinner and dance will be held.

THE TOWER CLUB: The elevator climbs its way to the penthouse floors of Hammons Tower. From its marble floors to its polished brass banisters and floor-to-ceiling windows, The Tower Club provides guests with the ultimate fine dining experience rich in ambiance, history and breathtaking views from the 21st and 22nd floors of the Hammons Tower. The Springfield skyline has been defined by the gleaming black faГ§ade of the Tower for the past 20 years as it keeps watch over Hammons Field Baseball Park, home of the Springfield Cardinals. Adjoining both of these landmarks are the beautiful grounds, gardens and fountains of Jordan Valley Park, the Expo Center and University Plaza Hotel.

The University Heights Baptist Church and The Tower Club are located within a short distance from each other. Within walking distance from The Tower Club are two hotels. The Holiday Inn Express Hotel & Suites-SPRINGFIELD (1117 EAST ST. LOUIS STREET
SPRINGFIELD, MO 65806 UNITED STATES), and the University Plaza Hotel and Convention Center (333 John Q. Hammons Parkway Springfield, Mo 65806). Simply ask for the wedding rate and you will be given a discount at both hotels. Suites are available at both hotels.


A Special Message From Us

We both want to thank all of you for being patient with us in the untimely manner this wedding has occurred. We appreciate all of your support and are looking forward to our big day!